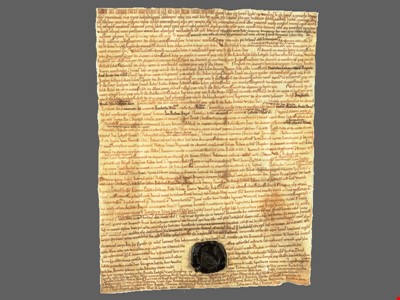 EN Charter of the Vyšehrad Chapter

24.04.2020 | The first written report of the Vyšehrad Chapter is found in the Chronica Boemorum by Cosmas.

The first written report of the Vyšehrad Chapter can be found in the Chronica Boemorum by Cosmas, which depicts Vyšehrad at the beginning of the 11th century as a fortified settlement. In the second half of that century, Vyšehrad became a royal residence thanks to Duke Vratislaus II (1061–1092) who was promoted to King of Bohemia in 1085. Vratislaus not only initiated the building activities and developed a spiritual background of his court at that place, but also established a Collegiate Chapter at Vyšehrad. At the same time, he made efforts to achieve an exemption of the Chapter from the authority of the Bishop of Prague. As a result, the Chapter was immediately subject to Pope.

It is not possible to determine the exact date when the Vyšehrad Chapter was established. Older literature mentions the year 1068. Presumably around 1070 the Collegiate Chapter was confirmed by Pope Alexander II. The papal charter is probably a forged (false) document. It contains an introduction with the obvious intention to entrust the temple and the Canons under the protection of the Pope. The church was entrusted to the protection of St Peter by Duke Vratislaus and the amount of annual payment of fees to the Pope was 12 talents. The exemption of the authority of the Bishop of Prague is also mentioned: the Bishop of Prague must not deny the right of the church at Vyšehrad to baptise and to ordain priests.

The so called founding charter by Vratislaus II has been preserved in four copies (A, B1, B2, and C). Although undated, it refers to the year of 1088. As for the content, the copies are almost identical. The abstract (regest) in the inventory of the Archive of the Collegiate Chapter of Vyšehrad by archivist Dr. František Beneš reads: “Vratislaus, Duke and ruler of the Czechs, endows Provost Benedict with the church of St Peter and St Paul and St Clement at Vyšehrad.”

Although the charter cannot be considered genuine for many reasons, it is reasonable to assume that the core parts of its content are based on real facts and that it was preceded by a now unknown and lost original document issued by Duke Vratislaus. Historian Václav Hrubý assumed that the document was issued by the Duke between 1074 and 1085. However, Gustav Friedrich, another historian, believed that Vratislaus had published it when he was already King of Bohemia.

Modern historiography has also addressed the question of the very existence of the original document. Based on the latest research, it tends to conclude that no original document actually existed and that the charter as we know it today is based on older documents.

Although we consider the founding charters to be false documents, they all give us irrefutable evidence of the existence of the Collegiate Chapter at Vyšehrad and of its significance, including the importance of the temple it administered. Today, these documents belong to the most valuable surviving documents of our country and, similarly, the Chapter belongs to the oldest still existing legal entities in the Czech Republic.